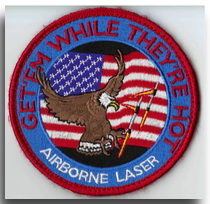 
The US Air Force airborne laser, (ABL), designated YAL-1A, is a high-energy laser weapon system for the destruction of tactical theatre ballistic missiles, which is carried on a modified Boeing 747-400F freighter aircraft.

The US Missile Defense Agency (previously called the Ballistic Missile Defence Organisation) is responsible for the management of the program and it is executed by the USAF from Kirtland AFB in Albuquerque, New Mexico.

In 1996, the Department of Defense awarded Team ABL a $1.1bn Programme Definition and Risk Reduction (PDRR) contract for the development and test of an airborne laser weapon system. During tests at TRW's Capistrano test site in 1998, the laser demonstration module achieved a power level 10% higher than the requirement. In April 2000 the ABL final critical design review was completed.
ABL systems
The ABL aircraft carries the COIL laser which generates the killer laser beam, an infrared surveillance and high speed target acquisition system and a high precision laser target tracking beam control system.

The primary laser beam is generated by a megawatt chemical oxygen iodine laser (COIL) located at the rear of the fuselage, which lases at 1.315 micron wavelength. The high-power laser beam travels towards the front of the aircraft through a pipe. The pipe passes through a Station 1000 bulkhead / airlock, which separates the rear fuselage from the forward cabins. The high-power beam passes through the fine beam control system mounted on a vibration isolated optical bench. Beam pointing is achieved with very fast, lightweight steering mirrors, which are tilted to follow the target missile. 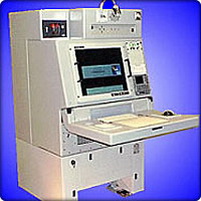 The beacon illuminating laser (BILL) has been developed by Northrop Grumman Space Technology. The kilowatt class BILL reflects light from the target to provide data on the rapidly changing characteristics of the atmosphere along the path of the laser beam. This data is used to control a set of deformable mirrors in the beam control system. The mirrors introduce tailored distortions into the COIL laser beam to compensate for atmospheric distortions and allow the COIL laser beam to fall on the target.

Intercept sequence
The ABL system uses infrared sensors for initial missile detection. After initial detection, three low power tracking lasers calculate missile course, speed, aimpoint, and air turbulence. Air turbulence deflects and distorts the laser beam. The ABL adaptive optics use the turbulence measurement to compensate for atmospheric errors. The main laser, located in a turret on the aircraft nose, is fired for 3 to 5 seconds, causing the missile to break up in flight near the launch area. The ABL is not designed to intercept TBMs in the terminal, or descending, flight phase. Thus, the ABL must be within a few hundred kilometers of the missile launch point. All of this occurs in approximately 8 to 12 seconds. 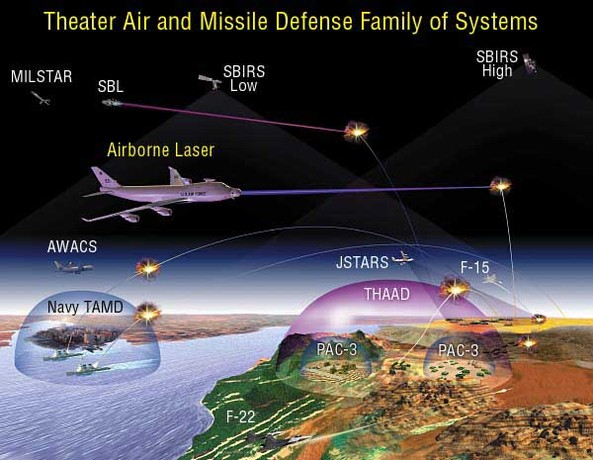 The ABL is designed to detect and destroy theatre ballistic missiles in the powered boost phase of flight immediately after missile launch while the aircraft loiters at an altitude of 40,000ft.

Missile launch is detected by a reconnaissance system such as satellite or airborne warning and control system (AWACS) aircraft and threat data is transmitted to the ABL aircraft by Link 16 communications.
A suite of infrared, wide-field telescopes installed along the length of the aircraft's fuselage detects the missile plume at ranges up to several hundred kilometres.

The pointing and tracking system tracks the missile and provides launch and predicted impact locations. The turret at the nose of the aircraft swivels towards the target and a 1.5m telescope mirror system inside the nose focuses the laser beam onto the missile. The laser beam locks onto the missile, which is destroyed near its launch area within seconds of lock-on.

Where the missile carries liquid fuel, the laser can heat a spot on the missile's fuel tank, causing an increase in internal pressure resulting in catastrophic failure. Alternatively, the missile is heated in an arc around its circumference and crumples under atmospheric drag force or its own g-force.

In November 2004, all six modules of the COIL laser were successfully fired for the first time. In August 2005, the ABL completed a series of flight tests demonstrating the performance of the beam and flight control systems. The BILL laser was delivered in January 2006.

In February 2007, the ABL began a series of flight tests, which included the first in-flight firing of the TILL targeting laser at a simulated target, in March 2007.

This was followed by flight tests of the BILL illuminating laser and tests of TILL, BILL and a surrogate high-energy laser (SHEL) low-power laser. Installation of the six COIL laser modules was completed in February 2008. The first firing ('first light') of the COIL laser took place in September 2008. The test lasted less than a second and is being followed by further ground tests of increased duration and power. In November 2008, the COIL laser was fired and focused through the beam control / fire control system. Missile intercept testing will start in August 2009. 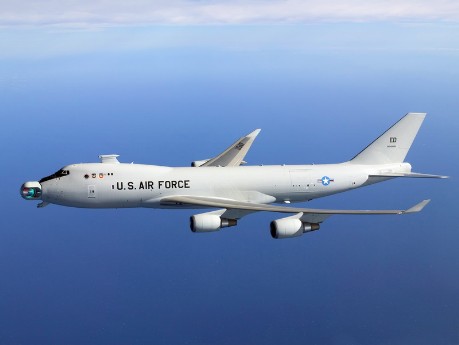 Use against other targets

In theory, the ABL could be used against hostile fighter aircraft, cruise missiles, or even low-earth-orbit satellites (see anti-satellite weapon). However, as they are not its intended target, the capability against them is unknown. The ABL infrared target acquisition system is designed to detect the hot exhaust of TBMs in boost phase. Satellites and other aircraft could have a much lower heat signature, making them more difficult to detect. An analysis by the Union of Concerned Scientists discusses potential ABL use against low earth orbit satellites.