Military aviation started on 10.12.1920, when an Air Academy was established. A French air misson brought some Caudron G.3 and Caudron G.4 aircraft to Venezuela in January 1921 and left in 1923. After that the Servicio de Aeronáutica Militar was established although flying operations were suspended until another French mission arrived in country in 1924. During 1928 the Aviación Militar Venezolana, as the service is known now, received Breguet 19 bomber and reconnaissance aircraft. The AMV saw its first combat operations during the revolution in 1929.

In 1930 the first air base for the AMV was built as Base Aérea Boca del Rio and the first operational unit, Grupo de Aviación Venezuela, was formed, which operated alongside the Grupo Escuela de Aviación Militar. During the 1930s many new aircraft were bought from France, UK and the USA. In 1936 the Regimiento Militar de Aviación 1 was formed, which operated as higher headquarters for the two subordinated groups. A reorganisation took place in 1938, when an Italien military mission arrived in Venezuela and the subordinated groups of Regimiento Militar de Aviación 1 were formed from units of the now disbanded Grupo de Aviación Venezuela.

From 1940 on Venezuela received some aircraft from the United States through the Lend-Lease programm. A military mission from the United States arrived in 1944 and the AMV was renamed "Servicio de Aeronáutica". But it was not until 1947, when the Venezuela Air Force became an independent service and was renamed "Fuerza Aérea Venezuelana" (FAV) on 10.10.1947. It was also in 1947 when the Venezuelan Air Force got transport, training and also, for the first time, combat aircraft from the USA. A mayor reorganisation took place on 12.3.1948, when Regimiento Militar de Aviación 1 was disbanded and the Grupo Mixto de Caza y Reconocimiento 9 and the Grupo Mixto de Bombardeo y Transporte 10 were formed.

During the 1950s large quantities of modern aircraft, Venom, Vampire, Camberra and F-86 Sabre were bought and many new squadrons were established. Money was available through the immense oil riches of Venezuela. The next reorganisation took place in 1961, when the existing squadrons were subordinated to special air groups. (e.g. Grupo Aéreo de Caza, Grupo Aéreo de Bombardeo or Grupo Aéreo de Transporte).

Another moderisation programme was launched in 1971 when Mirage V, CF-5A/D Freedom Fighter, OV-10E Bronco and some C-130H Hercules were bought to replace the obsolete fighter and COIN aircraft. During the next decade modern replacement was bought and Venezuela became the first and only country during this time in Southern America to receive F-16A/B fighters from the USA in 1983.

On 27.11.1992 Brig. Gen. Visconti of the FAV launched a coup to overtrough the president. Visconti concentrated a considerable number of FAV combat aircraft at BA El Libertador to support the coup. Aircraft of the rebels attacked the Presidential Palace and army barracks in Caracas. Meanwhile, an event occurred that was not a part of Visconti’s plan: during the assault on BA El Libertador, early in the morning, two F-16A-pilots, loyal to the president, of GAC16 hijacked two alert Fighting Falcons and took off. The pilots were vectored to intercept and seem to have caught rebel-flown strikers in the vicinity of Maracay, then the first OV-10 was shot down and crashed at BA El Libertador after the pilot ejected safely. The same F-16-pilot subsequently shot down another Bronco. Later on that day an F-16 shot down an AT-27 over Caracas. Obviously, the two F-16As were sufficient to establish air superiority for loyal troops. Once the rebel leaders realized their situation, Visconti and 92 other officers and soldiers left Palo Negro aboard the C-130H (FAV2715), escaping to Peru.
In 2006, Venezuelan F-16s, F-5s and Mirages participated in the joint exercise Cruzex III held in Brazil along with the air forces of Argentina, Brazil, Chile, France, Peru and Uruguay. 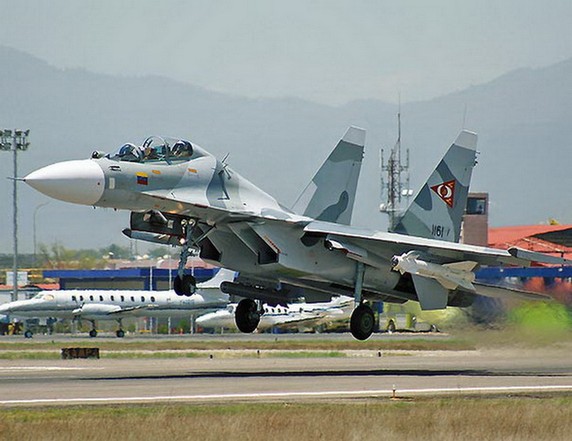 The Venezuelan military intends to purchase at least four Mi-28 attack helicopters, planned to be operational by 2012. It has also been reported that the AMV plans to acquire at least two Il-76 heavy transports.
The AMV purchased 24 Sukhoi Su-30 planes from Russia on July 2005, as a result of the American embargo on spare parts for their F-16 force.
Currently Venezuela is in talks with Russia with regards to potential acquisitions of the Su-35 fighter aircraft and a second batch of aircraft 12-24 Sukhoi Su-30.

In 2006, the Iranian media have published series of reports that suggested Venezuela was interested in selling its 21 F-16 Fighting Falcon fleet to Iran. The rumors were confirmed, when a Hugo Chavez advisor told the Associated Press that "Venezuela's military is considering selling its fleet of U.S.-made F-16 fighter jets to another country, possibly Iran, in response to a U.S. ban on arms sales to President Hugo Chavez's government". In response, Sean McCormack, the U.S. State Department spokesman, warned Venezuela and suggested: "Without the written consent of the United States, Venezuela can't transfer these defense articles, and in this case F-16s, to a third country".

The Air Force is organized in twelve air groups, one for each aircraft type in use: