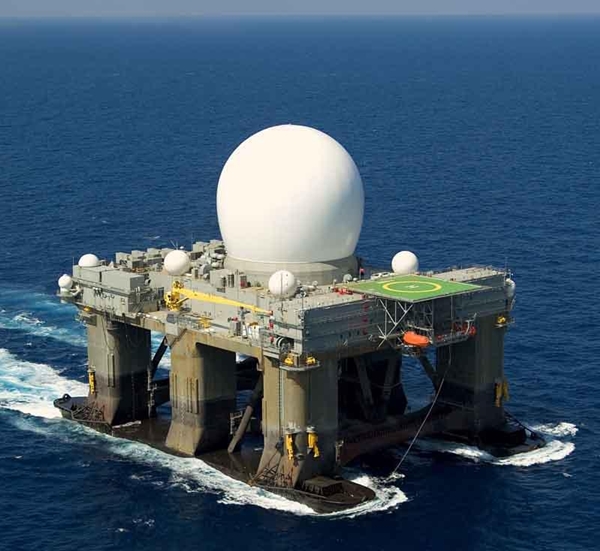 Raytheon’s nine-story-high X-band Radar (XBR) is the world's largest X-band radar
The sea-based X-band (SBX) platform that it sits on stands more than 250 feet high and displaces more than 50,000 tons. It consists of a semi-submersible oil production platform topped with the XBR.
XBR is the primary payload on the semi-submersible platform supporting the Ground-Based Midcourse Defense phase of the Missile Defense Agency Ballistic Missile Defense System.
SBX's floating platform, a modified oil-drilling vessel, was designed for exceptional stability in high winds and storms. Measuring 240 feet wide and 390 feet long, the vessel includes a power plant, bridge and control rooms, living quarters, storage areas, and enough floor space and infrastructure to support the X-band Radar.
The X-band Radar itself, which sits on top of the floating platform, is the largest, most sophisticated phased array, electro-mechanically steered X-band radar in the world.
It consists of thousands of elements driven by transmit/receive (T/R) modules. In the X-band Radar, they provide the full fire control sensor functions for the Ground-Based Midcourse Defense system, including search, acquisition, tracking, discrimination and kill assessment. The SBX component was developed under the direction of the Boeing Company.

The SBX deployed in 2006. The ship has spent time for maintenance and repair at Pearl Harbor, Hawaii several times, including 170 days in 2006, 63 days in 2007, 63 days in 2008, 177 days in 2009, and 51 days in 2010. When not at Hawaii, the SBX has been on operational deployments in the Pacific, including traveling to waters off Alaska. The ship has not moored at Alaska, in spite of the construction of a $26 million, eight-point mooring chain system installed in 2007 in Adak's Kuluk Bay. On June 23, 2009, the SBX was moved to offshore Hawaii in response to a potential North Korean missile launch. Between 2009 and 2010, the vessel spent 396 continuous days at sea.
The SBX failed during a flight test on January 31, 2010, designated FTG-06. The test was a simulation of a North Korean or Iranian missile launch. The test failure arose from two factors, the first being that algorithms in the SBX radar software which are designed to filter out extraneous information from the target scene were left disengaged for the test, and the second was a mechanical failure in a thruster on the kill vehicle.
During flight test FTG-06a on December 15, 2010, the SBX performed as expected, but intercept of the target missile was again not achieved.
In May 2011, the SBX-1 entered Vigor Shipyard (formerly the Todd Pacific Shipyard) in Seattle for a $27 million upgrade and maintenance work by contractor Boeing. The work was completed in about three months and in August 2011, SBX-1 departed Seattle for deployment.
In February 2012, the Missile Defense Agency requested only $9.7 million per year for Fiscal Years 2013 through 2017, down from $176.8 million in fiscal 2012. This reduced amount would be used to maintain SBX in a “limited test support” role, "while also retaining the ability to recall it to an active, operational status if and when it is needed.”
In April 2012 it was reported that SBX-1 had left Pearl Harbor and was assumed to be being deployed to monitor North Korea's planned Unha-3 missile in the launch window of 12–16 April 2012. The vessel returned to Pearl Harbor on 21 May 2012. It redeployed to monitor the next North Korean launch attempt at the end of 2012.
In April 2013 it was reported that SBX-1 was being deployed to monitor North Korea.