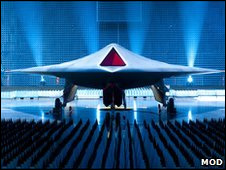 The BAE Systems Taranis is a British demonstrator program for Unmanned Combat Air Vehicle (UCAV) technology. It is an unmanned warplane which is designed to fly between continents. It will carry a variety of weapons which will enable it to attack planes and also targets on the ground. It will utilise technology making it invisible to radar and it can be controlled from anywhere in the world via satellite communications.

Named after the Celtic god of thunder Taranis it will "explore and demonstrate how emerging technologies and systems can deliver battle-winning capabilities for the UK armed forces".

Taranis is led by BAE Systems and also involves Rolls-Royce, GE Aviation Systems, QinetiQ and the Ministry of Defence. As the prime contractor, BAE Systems is responsible for the overall programme and also for many of the technologies including stealth and low observability, systems integration and system control infrastructure. BAE Systems and QinetiQ are working closely on all aspects relating to the autonomy of the system.

BAE Systems said "Taranis will make use of at least 10 years of research and development into low observables, systems integration, control infrastructure and full autonomy. It follows the completion of risk reduction activities to ensure the mix of technologies, materials and systems used are robust enough for the 'next logical step'." These "risk reduction activities" were related BAE programs including Replica, Nightjar I, Nightjar II, Kestrel, Corax, Raven and HERTI. BAE Systems Australia will have a workshare of about 5% in the program. The Taranis demonstrator will have a maximum takeoff weight (MTOW) of about 8,000 kilograms (18,000 lb) and be of a similar size to the BAE Hawk. The first steel was cut in September 2007 and assembly began in February 2008.

Ground testing started in early 2009. On 9 January 2009, the MoD denied that the Taranis had been flying near the site of a smashed wind turbine, after local people claimed to have seen a UFO.

The demonstrator will have two internal weapons bays. With the inclusion of "full autonomy" the intention is thus for this platform to be able to "think for itself" for a large part of the mission.

The development of UAVs was a key part of the UK's Defence Industrial Strategy announced in December 2005, particularly the ability of the UK to maintain its "sovereign" aircraft and UAV/UCAV skills.

Prototype unveiledThe prototype Taranis, which cost £143 million to develop, was unveiled by BAE Systems at Warton Aerodrome, Lancashire on 12 July 2010. Flight trials were initially expected to begin in 2011, but as of February 2011 the first flight has been delayed to 2012.

Specifications
Although the aircraft is still in development phase, the latest specifications which are publicly available are as follows: