Built by Harland and Wolff in Belfast, she was originally to be called HMS Brave; the Royal Navy had originally intended to rush her into service for operations in the Indian Ocean during World War II, thus she was built without heaters for some onboard equipment since heat was unnecessary in tropical operations.

She was launched on 20 May 1944 and completed on 24 January 1946. She was transferred to the Royal Canadian Navy and commissioned as HMCS Warrior. She entered Halifax harbour on 31 March 1946, a week after leaving Portsmouth. She was escorted by the destroyer HMCS Micmac and the minesweeper HMCS Middlesex. The RCN experienced problems with the unheated equipment during operations in cold North Atlantic waters off eastern Canada during 1947. The RCN deemed her unfit for service and made arrangements with the Royal Navy to trade her for a more suitable aircraft carrier of the Majestic class which became HMCS Magnificent (CVL 21) on commissioning, rather than retrofit her with equipment heaters.

HMCS Warrior returned to the United Kingdom and was recommissioned as HMS Warrior (R31) on 23 March 1948. Warrior was then refitted in Devonport and equipped with a flexible flight deck (layers of rubber) to test the feasibility of receiving undercarriage-less aircraft; the Sea Vampire was used to test the concept, which was successful but not introduced into service.
She went into reserve in September 1949, and was recommissioned in June 1950 as a transport for troops and aircraft to support British forces during the Korean War. The ship underwent refit during most of 1952 and 1953 at Devonport Dockyard, and after a brief return to service was again put in for refit on 14 December 1954. This time Warrior received a very slightly angled flight deck for trials. She took part in Operation Grapple, the first British hydrogen bomb tests, embarking a handful of helicopters and Grumman Avenger AS.4s to collect samples from the tests and ferry them back for testing. After the operation was completed the Avengers were catapulted into the sea as they were contaminated with radioactivity. Considered surplus to requirements by the late 1950s, the Royal Navy decommissioned Warrior in February 1958 and offered her for sale. The return voyage from the Grapple tests was via Argentina, with port visits and demonstrations to the Argentine Navy, to whom the Admiralty was trying to sell her.

She was sold to Argentina in the summer 1958 and renamed ARA Independencia (V-1). Argentine Naval Aviation began air operations from Independencia in June 1959 even before the vessel was officially commissioned into the fleet. The anti-aircraft armament was initially reduced to 12 40 mm guns, soon further reduced to eight. In May 1962 the ship was however provided with a one quadruple and nine double complexes of that caliber.
F4U Corsair, SNJ-5Cs Texan and Grumman S2F-1 (S-2A) Trackers formed the air group in those years.
The Navy inventory also included F9F Panther (the first jet fighters in the Argentine Naval Aviation, starting from August 1963) and F9F Cougar jets, although the Independencia proved to be unsuitable for operating them. They were embarked during their delivery voyage from the United States to Argentina. The ship also used the TF-9J Cougar training jet, as well as the North American T-28 Trojan trainer, in the armed version Fennec built in France.
After the carrier ARA Veinticinco de Mayo (V-2) entered service in 1969, Independencia passed to the reserve (1970). She was scrapped in 1971.

The ARA Veinticinco de Mayo (V-2) was an aircraft carrier in the Argentine Navy from 1969 to 1997. The English translation of the name is the Twenty-fifth of May, which is the date of Argentina's May Revolution in 1810.
The ship previously served in the Royal Navy as HMS Venerable and the Royal Netherlands Navy as HNLMS Karel Doorman. She was deployed south during the Beagle Crisis in 1978 and in the first weeks of the Falklands War, where her aircraft were deployed against the Royal Navy task force.

The ship was built by Cammell Laird in Birkenhead, England during the Second World War for the Royal Navy. As a Colossus-class aircraft carrier, she was named HMS Venerable and saw service in the British Pacific Fleet. However Venerable only served three years in the Royal Navy before being sold to the Dutch as HNLMS Karel Doorman.
After a boiler room fire, the carrier was rebuilt, and sold to Argentina. The Argentines already operated a carrier, the ARA Independencia, also a former Royal Navy Colossus-class. After Independencia was decommissioned in 1970, the Veinticinco de Mayo was the sole remaining carrier in the Argentine fleet. It could carry up to 24 aircraft.
The air group started with F9F Panthers and F9F Cougars jets and later these were replaced with A-4Q Skyhawks supported by S-2 Tracker anti-submarine warfare aircraft and Sikorsky Sea King helicopters.
On September 1969, during the voyage of the recently bought 25 de Mayo in the Netherlands, Hawker Siddeley demonstrated their Harrier GR.1 onboard the carrier for a possible sale to the Argentine Navy. 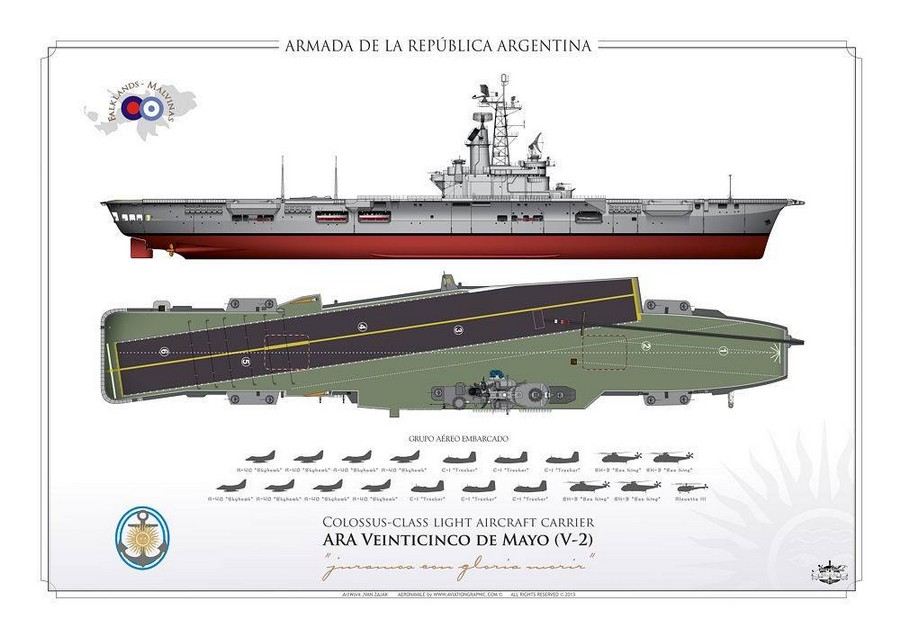 During the Operation Soberania the Veinticinco de Mayo was planned to support the invasion of the Picton, Nueva and Lennox islands.

During the Malvinas War (Guerra del Atlántico Sur) the Veinticinco de Mayo was deployed in a task force north of the Islands, with the ARA General Belgrano to the south. After hostilities broke out on 1 May 1982, the Argentine carrier attempted to launch a wave of A-4Q Skyhawk jets against the Royal Navy Task Force after her S-2 Trackers detected the British fleet.
However what would have been the only battle between aircraft carriers since World War II did not take place, as poor winds prevented the heavily loaded jets from being launched. After the British nuclear-powered submarine HMS Conqueror sank the General Belgrano, the Veinticinco de Mayo returned to port for safety. Her A-4Q Skyhawks flew the rest of the war from the naval airbase in Río Grande, Tierra del Fuego, and had some success against the Royal Navy, sinking HMS Ardent, although three Skyhawks were shot down by Sea Harriers.
In 1983, the Veinticinco de Mayo was modified to carry the new Dassault Super Étendard jets Video but soon after problems in her engines largely confined her to port; she was deemed more or less unseaworthy.

The Argentine Navy could not procure the funds for a modernization and new engines, leading to decommissioning by 1997. By this time she had already been stripped of various major pieces of equipment that were used as spares for the Brazilian carrier NAeL Minas Gerais, another Colossus-class ship which had been heavily modified in the Netherlands. Finally in 2000, she was towed to Alang, India for scrapping.
Although the Minas Gerais was offered to the Argentine Navy as a replacement in 2000 she was rejected due to her poor condition and high restoration and maintenance costs. Argentine cooperation with Brazil has meant that the naval air wing has continued to operate from the deck of carrier NAe São Paulo during ARAEX exercises video and/or touch-and-go landings on US Navy carriers when they are in transit within Argentine coastal waters during Gringo-Gaucho manouvres .