The Mil Mi-24 (NATO reporting name "Hind") is a large helicopter gunship (and attack helicopter) and low-capacity troop transport (Carries 8) produced by Mil Moscow Helicopter Plant and operated from 1972 by the Soviet Air Force, its successors, and over thirty other nations. In October 2007, the Russian Air Force announced it would replace its 250 Mi-24 helicopter gunships with 300 more modern Mi-28s and possibly Ka-50s by 2015.

In NATO circles the export versions, Mi-25 and Mi-35, are simply denoted with a letter suffix as "Hind D" and "Hind E" respectively. Soviet pilots called the aircraft letayushchiy tank, “flying tank”. More common unofficial nicknames were (Krokodil, “Crocodile”), due to the helicopter's new camouflage scheme and (Stakan, “Glass”), because of the flat glass plates which surround the three place cockpit of the Mi-24A. 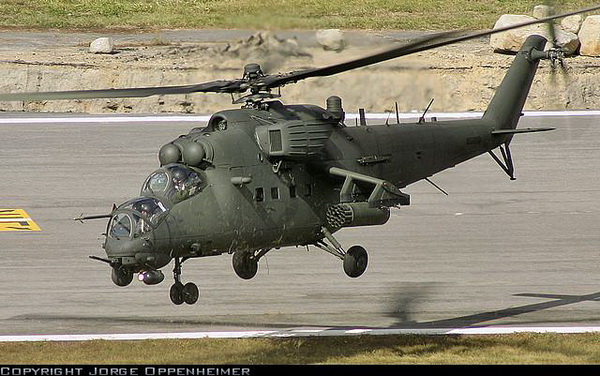 Considerable attention was given to making the Mi-24 fast. The airframe was streamlined, and fitted with retractable tricycle undercarriage landing gear to reduce drag. The wings provide considerable lift at high speed, up to a quarter of total lift. The main rotor was tilted 2.5° to the right from the fuselage to counteract dissymmetry of lift at high speed and provide a more stable firing platform. The landing gear was also tilted to the left so the rotor would still be level when the aircraft was on the ground, making the rest of the airframe tilt to the left. The tail was also asymmetrical to give a side force at speed, thus unloading the tail rotor.

A modified Mi-24B, named A-10, was used in several speed and time to climb world record attempts. The helicopter had been modified to reduce weight as much as possible, and among the measures used was to remove the stub wings. The speed record over a closed 1000 km course set on August 13, 1975 of 332.65 km/h still stands, as does many of the female specific records set by the all female crew of Galina Rastorgoueva and Ludmila Polyanskaia. On 21 September 1978 the A-10 set the absolute speed record for helicopters with 368.4 km/h over a 15/25 km course. The record stood until 1986 when it was broken by the current record holder, a modified Westland Lynx.