The Embraer KC-390 is a medium-size, twin-engine jet-powered military transport aircraft under development by Brazilian aerospace manufacturer Embraer. It is able to perform aerial refueling, transport cargo and troops, and to receive fuel in-flight. It will be the heaviest aircraft that the company has made, and will be able to transport up to 23 tons of cargo, including wheeled armored vehicles.

Design and development
In 2006, Embraer began studies on a military tactical transport design of a similar size to the Lockheed C-130 Hercules. In April 2007, Embraer reported it was studying a medium-size airlifter, with the company designation "C-390". The transport aircraft is to incorporate many of the technological solutions from the Embraer E-Jets series. It will feature a rear ramp for loading and unloading a wide range of cargo. The unit price is estimated to be 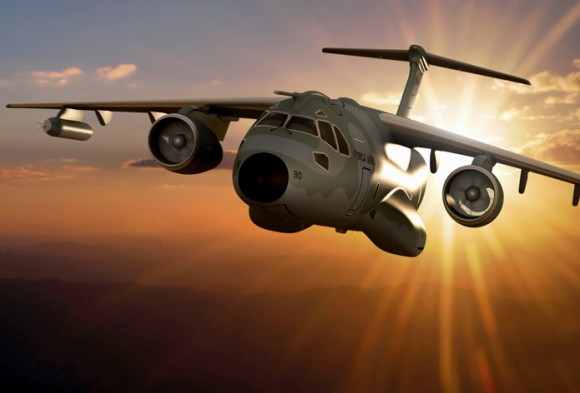 around US$50 million, while the competition sells similar models, such as the C-130J for up to $62 million.
The vice president of Embraer, Luis Carlos Aguilar, said that according to their estimates, some 695 military transport aircraft in the world will need to be replaced during the next decade, and that there is potential market for this kind of plane.] Potential power plant options have been studied in the 75.6 to 98 kN (17,000–22,000 lb.) thrust range, including engines such as Pratt & Whitney's PW6000 and Rolls-Royce's BR715.
In early March 2008, the Brazilian Government planned to invest about R$60 million (or US$33 M) in initial development of the aircraft. At the same time, the Brazilian Air Force was finalizing the purchase contract that probably will buy 22 to 30 aircraft in the first order. Embraer is talking with the possible partners. In May 2008, the Brazilian Congress released 800 million Reais (US$440 M) to be invested in the project and development of the aircraft. The media also claimed that this aircraft is not only going to be used by the Brazilian Air Force, but also for Brazilian Army and Brazilian Navy, but still not confirmed for government agencies.
On 14 April 2009, Embraer was awarded with a $1.5 billion contract to develop and build 2 prototypes. In March 2010, Embraer drew up a development schedule, with the first prototype aircraft scheduled to be delivered in late 2014.
In July 2010, during the Farnborough Airshow, the Brazilian Air Force announced it will order 28 KC-390s. During the show, Embraer announced an increase in the cargo capacity to 23 tons and that first flight is planned for 2014. In 2010, National Aerospace Laboratory (NLR) designed and built a large high-grade aluminum alloy wind tunnel model for the KC-390, focused on its aerodynamic features during takeoff and landing.
During 2011 Paris Air Show, Embraer announced plans to launch a stretch version of the KC-390 focused on the civil cargo market in 2018, with 200-250 predicted orders over a 10-year period. Two plugs will be added before and after of the center section to lengthen the fuselage from the current 33.91 m (111.3 ft.), not only increasing internal capacity, but also providing for a side cargo door.
In June 2012, Boeing and Embraer agreed to co-operate with technical know-how to spur development of the aircraft. The companies are to exchange technical and market information, and possibly team up for commercial opportunities. The KC-390 collaboration is part of a broader agreement that Boeing and Embraer signed in April of the same year.

Partnerships and manufacturing
In August 2010, Argentine Defense Minister Nilda Garré announced that Argentina will participate on the construction of the C-390. On 24 August 2010 the defense ministers of Chile and Brazil signed an agreement for Chile's ENAER Company to join KC-390 industry team. Colombia also signed an agreement to join the KC-390 programme. On 10 September 2010 Portugal defense minister signed an intentions letter in order to join the programme.

Operational history
Orders and potential customer evaluations
It was reported in 2007 that the Brazilian postal service Correios was interested in buying at least 5 and eventually 20 to 25 of the aircraft, in lieu of using commercial freight service for mail transport. On 19 May 2011, it was stated that Correioslog will buy around 15 aircraft for civil use.

In September 2008, the Portuguese Air Force chief-of-staff, being interviewed for a national aviation newspaper Take Off revealed a service interest in the airplane as a possible C-130 fleet replacement, although this interest was outlined as the PoAF being closely monitoring the C-390 development, with a possible order in the future. In February 2010, a further notice reports that Embraer proposed to the Ministry of Defense the acquisition of KC-390 to substitute the ageing C-130 of the Portuguese Air Force. In December 2011 it was announced that the Portuguese government will sign an 87 million euro contract with Embraer for part of the production of the KC-390.
On 7 September 2009, it was announced that France was interested in buying 10 KC-390s as part of negotiations for Brazil to buy the DassaultRafale.
On 2 October 2009, Sweden declared its intention to evaluate the KC-390 transport aircraft for long term tactical air transport needs connected to its F-X2 offer on JAS 39 Gripen.
In July 2010, Brazilian Air Force announced it intend to buy 28 aircraft.
In August 2010, it was announced that the Chilean Air Force plans to order six KC-390s. It was reported in September 2010 that Colombia intends to order 12 KC-390s. Later on that month, it was also reported that Czech Republic air force might acquire two KC-390s.
In October 2010, Embraer announced the future acquisition of six KC-390s by the Argentine Air Force. It was reported that Brazil and the UAE were negotiating an agreement for military cooperation, which would involve sales of KC-390 in late October.
On 14 February 2012, Brazilian Defense Minister announced that Peru is interested in potentially acquiring an undisclosed number of KC-390s.
April 2013, Six countries have signed commitments totaling 60 of the twinjets: Argentina (6), Brazil (28), Chile (6), Colombia (12), the Czech Republic (2) and Portugal (6).
June 2013, Embraer and Boeing sign an agreement to market the KC-390 in limited international venues, building on the June 26/12 MoU. Boeing will be the lead for KC-390 sales, sustainment and training opportunities in the USA, UK and selected Middle East markets.

Brazil and Argentina aircraft industries have signed a partnership contract for the manufacturing of the Embraer KC 390, a medium sized twin engine jet powered military transport aircraft with a 23 tons capacity.
The contract was signed in Rio do Janeiro by Embraer Defence and Security Department and Argentina’s Fabrica Argentina de Aviones, FAdeA. Under the agreement FAdeA will manufacture the spoilers (plates on the top surface of a wing for controlling wing lift), doors for the nose landing gear, ramp door, flap fairings, tail cone, and electronic cabinet
.
“FAdeA’s participation in the KC-390 program strengthens the cooperation between the defence technological and industrial bases of both countries, strictly in line with Brazil’s National Defence Strategy”, said Luiz Carlos Aguiar, President of Embraer Defence and Security.
The agreement follows on from the Declaration of Intent signed by the Brazilian and Argentine Ministries of Defence in October 2010, which reinforces the commitment of the Argentine government to acquire six KC-390 aircraft.