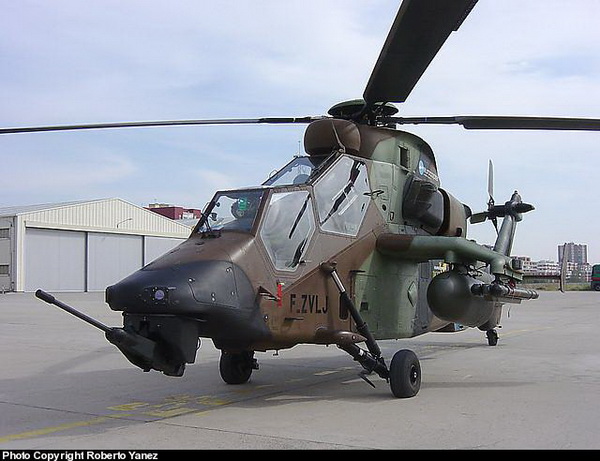 Design
The body of the Tiger is made from 80% carbon fiber reinforced polymer and kevlar, 11% aluminium, and 6% titanium. The rotors are made from fiber-plastic able to withstand combat damage and bird strikes. Protection against lightning and electromagnetic pulse is ensured by embedded copper/bronze grid and copper bonding foil.

While the Tiger has a conventional helicopter gunship configuration of the two crew sitting in tandem, it is somewhat unusual in that the pilot is in the front seat and the gunner is in the back, unlike all other current attack helicopters. The seats are offset to opposite sides of the centerline to improve the view forward for the gunner in the back.

Crews coming to the Tiger from other platforms require additional training because the additional capabilities bring a higher workload.

Installed in the helicopter are an AN/AAR-60 MILDS System ensuring radar warning, a laser warning system, and a missile launch/approach detector developed by EADS DE, all connected to a central processing unit from Thales and a SAPHIR-M chaff/flare dispenser from MBDA. Its visual, radar, infrared, sound signatures have been minimized.

Engines
The Tiger is powered by two MTU Turbomeca Rolls-Royce MTR390 turboshaft engines. Some variants have enhanced engines, such as the Tiger HAD or some UHTs.

Helmet-Mounted Sight DisplayFrench helicopters are equipped with TopOwl helmet-mounted sight for both pilot/co-pilot and one HUD for the pilot from Thales Avionics.

German crew is equipped with HMSD from BAE systems.
Australian Tigers crew use the TopOwl HMSD from Thales Avionics.

It is fitted with a chin-mounted 30 mm gun turret and can carry 68 mm SNEB unguided rockets or 20 mm machine cannons for the fire support role as well as Mistral air-to-air missiles.

The UHT can carry PARS 3 LR "fire and forget" and/or HOT3 anti-tank missiles as well as 70 mm Hydra air-to-ground fire support rockets. Four AIM-92 Stinger missiles (2 on each side) are mounted for air-to-air combat. Unlike the HAP/HCP version it has no integrated gun turret, but a 12.7 mm gunpod can be fitted if needed. The German Army decided against the French 30 mm GIAT cannon that is used on other Tiger versions because it was dissatisfied with the heavy recoil of this weapon. The upgrade of the UHT with the Rheinmetall RMK30, a 30 mm recoilless autocannon, is not yet clarified due to the budget.

Another noticeable difference with the HAP version is the use of a mast-mounted sight, which has second-generation infrared and CCD TV cameras. Countermeasures include radar/laser/missile launch/missile approach warning receivers and decoy launchers.

In August 2009, the German magazine Der Spiegel reported that the ten operational Tiger aircraft in the German Army were only suitable for pilot training, while others have not been accepted due to defects. The German defense ministry said that the helicopter has "serious defects particularly with its wiring," while Eurocopter said "Corrective measures related to wiring problems have been developed, agreed by the customer and are being implemented," and that two corrected helicopters will be handed over to the German military in two months.

Tiger ARH
This section's factual accuracy may be compromised because of out-of-date information. Please help improve the article by updating it. There may be additional information on the talk page. (November 2010)

The Tiger ARH (Armed Reconnaissance Helicopter) is the version ordered by the Australian Army to replace its OH-58 Kiowas and UH-1 Iroquois-based 'Bushranger' gunships. The Tiger ARH is a modified and upgraded version of the Tiger HAP with upgraded MTR390 engines as well as a laser designator incorporated in the Strix sight for the firing of Hellfire II air-to-ground missiles. Instead of SNEB unguided rockets, the ARH will operate 70 mm (2.75 in) rockets from Belgian developer, Forges de Zeebruges (FZ). 22 of the helicopters have been ordered, most of which will be operated by the 1st Aviation Regiment based at Robertson Barracks in Darwin. Final deliveries are scheduled for June 2010, with full operating capability in December 2011.

Tiger HAD
The Tiger HAD (Hélicoptère d'Appui Destruction, in French or Helicoptero de Apoyo y Destrucción in Spanish for "Support and Attack Helicopter") version is essentially identical to the HAP version, but with 14% more engine power available due to the upgraded Enhanced MTR390 engines (1464 shp) and a better ballistic protection, as a result of the specific requests made by the Spanish Army. It can also be equipped with the PARS 3 LR anti-tank missiles that were originally developed for the German UHT version, the Hellfire II  and is equipped with Spike ER for Spanish Army.

The helicopter is suited for a support and fire suppression role and has been selected by the Spanish Army. The French Army Light Aviation (ALAT) decided to upgrade most of their HAP helicopters to the HAD-Variant and thus the former HAC Variant (i.e. Hélicoptère Anti-Char or "Anti-Tank Helicopter") was cancelled.

By June 2006, 28 production Tigers were flying, including 18 aircraft delivered to their customers of 4 countries.

Guns: 1× 30 mm (1.18 in) GIAT 30 cannon in chin turret
On its two inner hardpoints and two outer hardpoints the Eurocopter Tiger can carry a combination of the following weapons: