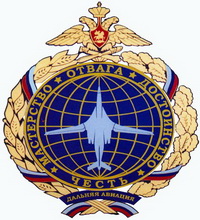 The Tupolev Tu-160 (NATO reporting name: Blackjack) is a supersonic, variable-sweep wing heavy strategic bomber designed by the Soviet Union. Although several civil and military transport aircraft are larger in overall dimensions, the Tu-160 is currently the world's largest combat aircraft, largest supersonic aircraft, and largest variable-sweep aircraft built. In addition, the Tu-160 has the heaviest takeoff weight of any combat aircraft.
Entering service in 1987, the Tu-160 was the last strategic bomber designed for the Soviet Union. The aircraft remains in limited production, with at least 16 currently in service with the Russian Air Force.

Development
The first competition for a supersonic strategic heavy bomber was launched in the Soviet Union in 1967. The new plane was to have a cruise speed of over Mach 3, in response to the American B-70 Valkyrie. It soon became apparent that such an aircraft would be too expensive and difficult to produce, so it was decided to reduce demands (in the US, the B-70 bomber project had already been cancelled).

In 1972, the Soviet Union launched a new multi-mission bomber competition to create a new supersonic, variable-geometry ("swing-wing") heavy bomber with a maximum speed of Mach 2.3, in response to the US Air Force B-1 bomber project. The Tupolev design, dubbed Aircraft 160M, with a lengthened flying wing layout and incorporating some elements of the Tu-144, competed against the Myasishchev M-18 and the Sukhoi T-4 designs. Myasishchev's version, proposing a variable-geometry aircraft, was considered to be the most successful, although the Tupolev organization was regarded as having the greatest potential for completing this complex project. Consequently, Tupolev was assigned in 1973 the development of a new aircraft based on the Myasishchev design.

Although the B-1A was cancelled in 1977, work on the new Soviet bomber continued, and in the same year, the design was accepted by the government committee. The prototype was photographed by an airline passenger at a Zhukovsky Airfield in November 1981, about a month before the aircraft's first flight on 18 December 1981. Production was authorized in 1984, beginning at Kazan Aircraft Production Association. Production of the aircraft, designated Tu-160 (factory designation "aircraft K" or "product 70"), was originally intended to total 100 aircraft, although only 35 have been produced, including three prototypes. The second prototype was lost in flight testing in 1987, the crew ejecting successfully. 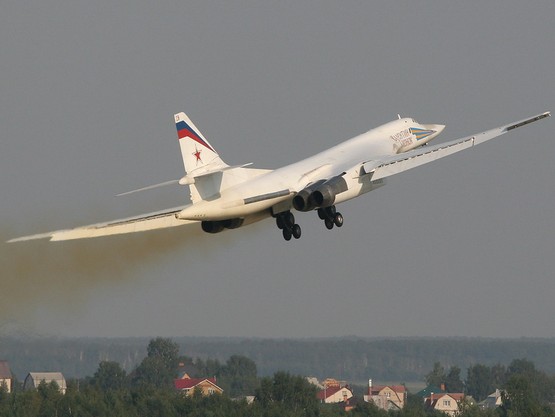 The Tu-160 is a variable-geometry wing aircraft, with sweep selectable from 20° to 65°. The aircraft employs a blended wing profile and full-span slats are used on the leading edges, with double-slotted flaps on the trailing edges. The Tu-160 has a fly-by-wire control system.
It is powered by four Kuznetsov NK-321 afterburning turbofan engines, the most powerful ever fitted to a combat aircraft. Unlike the B-1B Lancer, which failed the Mach 2+ requirement of the original B-1A, it retains variable intakes, and is capable of reaching speeds slightly higher than Mach 2 at altitude.

Although the Tu-160 was designed for reduced detectability to both radar and infrared, it is not a stealth aircraft. Nevertheless, on 25 April 2006 Lt. Gen. Igor Khvorov claimed that Tu-160s had managed to penetrate the US sector of the Arctic undetected, leading to a USAF investigation.

The Tu-160 has a crew of four (pilot, co-pilot, weapons systems officer and defensive systems operator) in K-36DM ejection seats. The pilot has a fighter-style control stick, but the flight instruments are traditional "steam gauge" dials. A crew rest area, a toilet, and a galley are provided for long flights. There is no HUD, nor are CRT multi-function displays provided in the original aircraft; however, plans for modernization of all Tu-160s were announced in 2003. They include a new digital flight control system, and the ability to carry new weapon types, such as new non-nuclear long-range cruise missiles.

Weapons are carried in two internal bays, each capable of holding 20,000 kg (44,400 lb) of free-fall weapons or a rotary launcher for nuclear missiles; additional missiles may also be carried externally. The aircraft's total weapons load capacity is 40,000 kg (88,185 lb). However, no defensive weapons are provided; the Tu-160 is the first unarmed post-World War II Soviet bomber.

A demilitarized, commercial version of the Tu-160, dubbed Tu-160SK, was displayed at Asian Aerospace in Singapore in 1994 with a model of a small space vehicle named Burlak attached underneath the fuselage. In 1995 Tupolev announced a partnership with the German firm OHB-System to produce the aircraft as a carrier for the launch vehicle; the German government subsequently withdrew funding in 1998.

While similar in appearance to the American B-1 Lancer, the Tu-160 is entirely different class of combat aircraft,[citation needed] its primary role being standoff missile platform (strategic missile carrier). Tu-160 is also larger and faster than the B-1B and has a greater combat range, though the B-1B has a larger combined payload and more modern avionics.
Operational history

DeploymentSquadron deployments to Long Range Aviation began in April 1987 before the Tu-160 was first presented to the public in a parade in 1989. In 1989 and 1990 it set 44 world speed flight records in its weight class. Until 1991, 19 of those aircraft served in the 184th Guards Heavy Bomber Regiment in Pryluky in the Ukrainian Soviet Socialist Republic, replacing Tu-16 and Tu-22M3 aircraft. In January 1992, Boris Yeltsin decided to discontinue production of the Tu-160. By this time, 35 aircraft had been built. In the same year, Russia unilaterally suspended its flights of strategic aviation in remote regions. After the fall of the Soviet Union, 19 of 35 of those aircraft became Ukrainian property, although in 1999 a deal between Russia and Ukraine led to eight of those aircraft being returned to Russia in exchange for a reduction in Ukraine's energy debts. Ukraine, which gave up nuclear weapons as part of the collapse of USSR, destroyed the other Blackjacks in its possession, except for one airframe retained for static display.

Russia's second Tu-160 unit, the 121st Guards Heavy Bomber Regiment basing in Engels, was organised in 1992, but by 1994 it had received only six aircraft. Between 1999 and 2000 the eight former Ukrainian planes were assigned to the regiment, and another newly factory-built aircraft was assigned in 2000. By early 2001, in accordance with the START-2 Treaty, Russia has had 15 new-built Tu-160s, of which six were formerly missile-armed strategic bombers. One aircraft was lost during a test flight after engine repairs, on 18 September 2003.

There were 14 Tu-160s in service as of November 2005. Another two new-built aircraft are nearing completion at the Kazan Aircraft Plant, one of which was due to enter service in March 2006, with the other following later in the year. As of 2001, six additional Tu-160 have served as experimental aircraft at Zhukovski, four of them remaining airworthy.

On 30 December 2005, under an order signed by Russian President Vladimir Putin, the Tu-160 officially entered service in the Russian Air Force.
On 17 August 2007 President Vladimir Putin announced that Russia was resuming the strategic aviation flights stopped in 1991, sending its bomber aircraft on long-range patrols. On 14 September 2007, British and Norwegian fighters intercepted two Tu-160s which breached NATO airspace near the UK and Finland. On 25 December 2007, two Blackjacks came close to Danish airspace, and two Danish Air Force F-16s scrambled to intercept and identify them.

According to Russian government sources, on 11 September 2007, a Tu-160 was used to drop the massive fuel-air explosive device, the Father of all bombs, for its first ever field test. However, some military analysts expressed skepticism that the weapon was actually delivered by a Blackjack.

On 28 December 2007, the first flight of a new Tu-160 was reported to have taken place following completion of the aircraft at the Kazan Aviation Plant. After flight testing, the bomber joined the Russian Air Force on 29 April 2008, bringing the total number of aircraft in service to 16. One new Tu-160 is expected to be built every one to two years until the active inventory reaches 30 or more aircraft by 2025-2030. 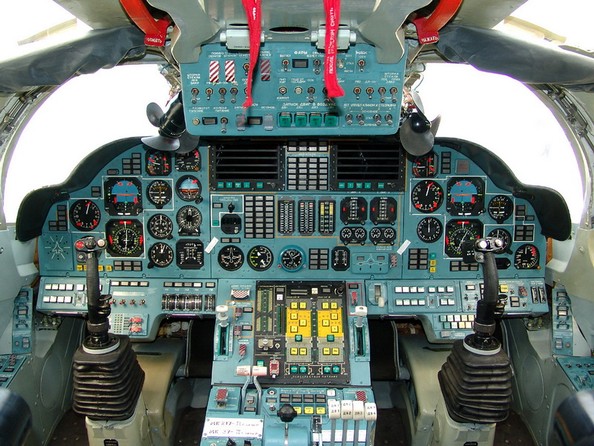 On 10 September 2008 two Russian Tu-160 landed in Venezuela as part of military maneuvers, announcing an unprecedented deployment to Russia's ally at a time of increasingly tense relations between Russia and the United States. The Russian Ministry of Defence said the two Tu-160 bombers were on a training mission. It said in a statement carried by Russian news agencies that the aircraft will conduct training flights over neutral waters before returning to Russia. Its spokesman added that the aircraft were escorted by NATO fighters as they flew across the Atlantic Ocean.

On 12 October 2008 a number of Tu-160 bombers were involved in the largest Russian strategic bomber exercise since 1984. A total of 12 bombers including Tu-160 Blackjack and Tu-95 Bear conducted a series of launches of their cruise missiles. Some bombers launched a full complement of their missiles. It was the first time that a Tu-160 had ever fired a full complement of missiles.

On 10 June 2010, two Tu-160 bombers carried out a record-breaking 23-hour patrol with a planned flight range of 18,000 kilometers. The bombers flew along the Russian borders and over neutral waters in the Arctic and Pacific Oceans.

Trainer aircraft
No dedicated Tu-160 trainer version has yet appeared. Initally, pilot training was conducted using Tu-22M Backfire bombers, but these were soon replaced with a highly modified variant of the Tupolev Tu-134 airliner. Designated the Tu-134UBL, this unusual aircraft has had the nose and cockpit section of a Tu-160 grafted onto the aircraft's nose, giving students an unobstructed view from the simulated Tu-160 cockpit. In this arrangement the Tu-134UBL is reported to have flying characteristics similar to the Tu-160.

Several variants have been proposed, but not built, including: