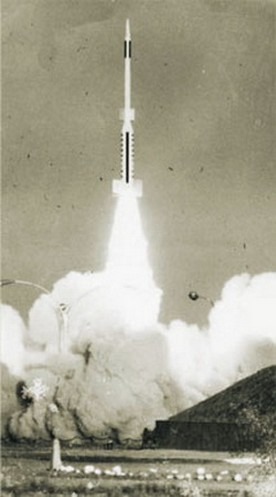 The CASTOR rocket expresses one of Argentina's biggest air-space developments. It has stages. The first stage is composed of four motors CANOPUS II, which is primarily linked to the tail fairing that supports four stabilizing fins, which have a rectangular form. The nozzles of the four motors are all inclined at a 5° angle in order to make the push of each one a combined center of gravity that reduces the dispersion. The second stage of the CANOPUS II rocket loaded with a 50 kg usable charge. This rocket was designed to be able to reach altitudes of between 450 and 500 km.
The CASTOR rocket weighed 280 Kg, it had a useable charge of 75 kg, and it had a propulsion weight of 852 kg, it distributed 680 kg in its first stage and 172 in its second stage. The total length of the rocket was 8.4 meters long, in which 3.36 meters belonged to the first stage, which had a width of 69 cm wide. It had a specific impulse of 220 sec. It is commonly called a scaling rocket. On December 22 and 23, 1969, they did three experiments with the rocket. Previously, they had done three other experiments in September and October, making a total of 5 takeoffs and 6 experiments.

The night of December 22 they initiated what was called the Christmas Experience with the takeoff of what was the most powerful rocket made in Argentina up until now: the Castor, a prototype which is equivalent to the greatest aspiration of our scientists and technicians, which was the result of a great effort by the IIAE. (1). The Castor Rocket has two stages; the first is integrated with four Canopus rockets and a second artifact equal to itself. In the reference experience they only used the first stage, the second one being inert and weighted, which is the reason that it only reached an altitude of 70 km, when it was expected to reach 500. They hoped to reach 500 km in the next experience while the rocket is fully armed.

The second test of the Christmas Experience also took place on the night of December 22 and it consisted in the takeoff of the Rigel rocket 04, which also had two stages, one integrated with the Canopus I and the other integrated with the Orion II. The height and speed of the experiment were exactly what the IIAR and the National University of Tucuman were expecting. The next day, at 0630 hours they realized the most important part of the test when they sent an ape into space.
They placed a Cay Monkey named Juan in the rocket head.

(1) The Institute of Aeronautical and Space Investigation. Benjamin Meiojas, Rockets in Argentina.

The red and gray rocket distanced itself with its precious cargo before a curious and expectant crowd. Eight minutes later, the helicopter in charge of recovering the "Emanecer" capsule took off in order to complete its task. Anxious observers, technicians, and press awaited the outcome of the test. The capsule was recovered with the Monkey Juan safe and sound after reaching an altitude of 60 km high. 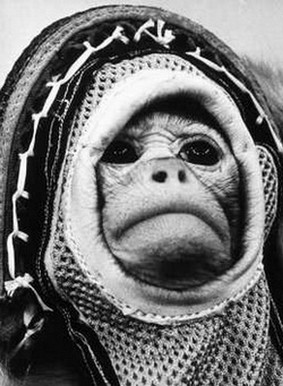 The capsule in which Juan traveled had maintained a rich environment of oxygen during the entire flight, and it also had a low percentage of carbon dioxide and humidity. These special devices assured a thermal and acoustic insulation adequate and proportioned to maintain an atmosphere with sufficient oxygen that had an adequate ventilation and control of humidity and carbon dioxide. The temperature had been maintained within the normal physiological limits. They were also able to register the animal's heart, breathing, and body temperature, as well as diverse parameters of the vehicle's dynamics using remote telemetry recorders.

For more information about the monkey that was sent into space: we can say that he was from the province of Misiones were he was captured by members of the National Gendarmerie, he was 2 years old, had a height of 30 cm, and he weighed 1400 grams. This experiment finished with the Bio Project II and the completion of its highest aspiration: the launching off and recovery of the most precious cargo that could be transported up until now in our country, and the privilege that our team of rocket scientists could reach great international achievements.