The PLA Navy has been reportedly seeking to acquire an aircraft carrier force as a part of its ambition to achieve a ‘blue-water’ naval capability for over a decade. Also it is generally believed that China has no financial or technological difficulties to build an aircraft carrier. However, despite various reports claiming that China may plan to refit one or more former Soviet Union’s aircraft carriers, or build carriers indigenously, no firm evidence has been found to show that such a plan has ever been initiated.

On the other hand, the aircraft carrier is of great importance to the PLA Navy’s power projection capabilities. Although China can already project military forces superior to those South-East Asian countries could deploy to the South China Sea, the PLA is still incapable of providing its forces in this region with credible air support. A fully operational aircraft carrier battle group could also shift the power balance in the Taiwan strait and the East Asia, and has implications for U.S. naval policy in Asia-Pacific region.

China’s ambition to build a ‘blue-water’ navy comprising aircraft carriers, large surface combatants and nuclear submarines can be traced back to the late 1950s, but the building of an aircraft carrier was not seriously considered until the early 1980s, when Admiral Liu Hua-Qing became the commander in chief of the PLA Navy, and later in the 1990s the vice chairman of the Central Military Commission (1989-97). Liu studied in Voroshilov Naval Academy in Leningrad, Soviet Union between 1954 and 1958, and became the driving force behind the transforming of the PLA Navy from a costal defence force to a regional naval force during his tenure.

Under the influence of Liu and other PLA Navy officers who strongly supported the ocean-going offensive strategy, in the early-1980s research institutes and think tanks within the PLA began to study the possibility of building a light aircraft carrier of around 15,000 to 20,000 tonne displacement and carrying helicopters and vertical take-off and landing (VTOL) aircraft such as Sea Harrier.

The aircraft carrier research programme was boosted when a Chinese ship breaker purchased the retired 15,000t aircraft carrier HMAS Melbourne from Australia. The ship, which was stationed in a seaport in Guangzhou for five years before it was finally dismantled for scrap, provided a valuable opportunity for the Chinese shipbuilding engineers to see at first-hand how the ship was designed and built.

In 1995-96 the Spanish shipbuilder Empresa Nacional Bazan approached the Chinese government to promote its two low-cost, lightweight conventional take-off and landing (CTOL) aircraft carrier designs, the 23,000t SAC-200 and the 25,000t SAC-220. However, China was only interested in obtaining the design blueprint rather than ordering the actual vessel. At the end of 1995 it was reported that France had offered to sell China the 32,700t carrier Clemenceau, which was decommissioned in September 1997. Again the deal went nowhere.

Between 1998 and 2000, three ex-Soviet Navy aircraft carriers, the 45,000t class Kiev class Minsk and Kiev, and the 67,500t Kuznetsov class Varyag, were purchased by Chinese commercial companies. The two Kiev class carriers have been developed into floating tourism parks based in Shenzhen and Tianjin respectively. The third ship, Varyag, is currently receiving refit at Dalian Shipyard to become a floating casino in Macao according to its owner, a Hong Kong/Macao based private company. It is unknown that how much value these three vessels are of to the Chinese aircraft carrier research programme, but without a doubt they all have been carefully examined by Chinese shipbuilders to benefit the future indigenous aircraft carrier project.

According to China’s navy development plan in the early 21st century, the second layer of defence and sea-denial capabilities are designed to primarily to break a blockade of the first island chain by 2015 to 2020. The roles of the aircraft carrier in this strategy remains uncertain. In fact many within the PLA and PLA Navy suggest that the military importance of the aircraft carrier is much less than its political importance. They argued that other platforms such as nuclear attack submarines (SSNs) would be much more useful for the PLA Navy in the near future. Some are also concerned that without a sufficient air, sea, and underwater protections, the aircraft carrier is no more than a sitting duck in a modern sea warfare. As the focus of China’s military planning shifts to the Taiwan Strait, the acquisition of aircraft carriers seems to have lost whatever urgency it had. 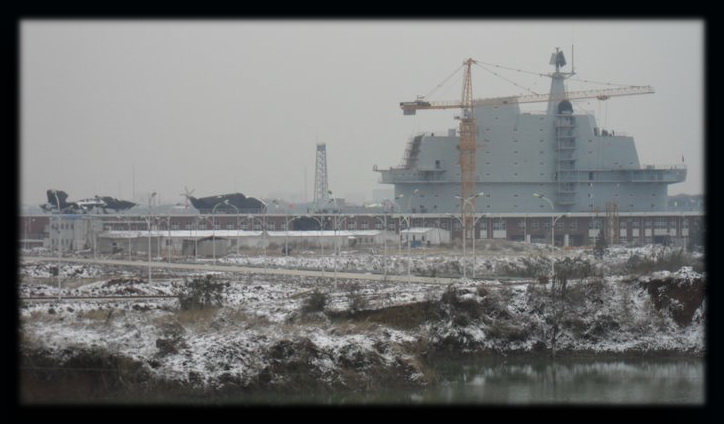 According to Russia’s military industrial complex site on February 9 reported that China has completed ground aircraft carrier fighter pilot simulation training system of the building. This concrete material model for a large aircraft carrier in the vicinity of Wuhan City, Hubei Province, with the “Varyag” was almost identical medium-sized aircraft carrier landing runway and bridge. Although it is unclear whether there has been training for carrier-based fighter pilot, but where there have been several aircraft carrier with Russian-made Su -33 fighter aircraft are very similar.

for now, is located in Wuhan, on the outskirts of this huge aircraft carrier model does not look like recreational facilities. British “short form the world’s ship,” Stephen Saunders, editor of this building is likely to be used for training aircraft carrier landing deck of the command staff and the development of carrier-based aircraft grounded order.
There have been reports that China is building two carrier-based fighter pilots used to train ground system. These two used to simulate the deck of aircraft carrier landing system in Liaoning and Shanxi provinces, respectively. Analysts pointed out that the size of these two systems may be related to China’s future aircraft carrier runway quite.

Chinese-built training center and carrier-based aircraft carrier in Ukraine is very similar to the ground training system. Two years ago, there were a number of Chinese officials to visit Ukraine’s air carrier aircraft ground testing and training system. Ukraine has said it wants to fight the system caused by international air carrier pilot training center, including the Chinese people, including attracting foreign partners. However, it seems the Chinese hope to build their own training facilities.

General characteristics are for the Varyag as originally designed 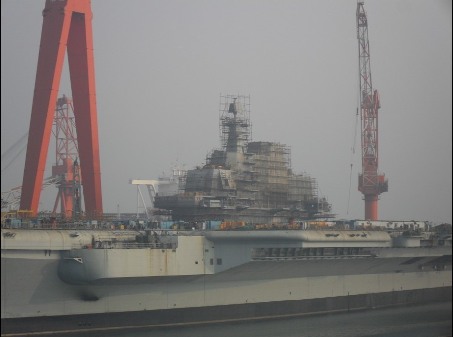 February 8, 2011; China has two aircraft carriers (Liaoning and "Carrier F") under construction, with one going to sea by next year. With the ship designs fixed, attention turns to the aircraft, both the types and their organization and operation. Current Chinese practice is to base seagoing aircraft (helicopters) at land facilities, sending them to serve on ships that are going to sea as needed. It appears that China will do the same thing, at least initially, with their carriers. This is different from American practice, where the carrier air wings are assigned permanently (except when the carriers are out of action for long periods of maintenance). Same with helicopters assigned to smaller surface ships. Chinese air wings will be more independent, and less similar in their organization.
What aircraft are going to sea with the carriers is less certain. The main Chinese carrier fighter is a navalized version of the J-11 (an illegal clone of the Russian Su-27). China got one of the Russian navalized Su-27s (the Su-33) from Ukraine, and are stealing more technology to navalize their 30 ton J-11 as the J-11BH (formerly the J-15). These will not be ready before the Liaoning puts to sea. Instead, it appears that navalized jet trainers will be used (the 9.8 ton JL-9, and possibly the more recent 9.5 ton JL-15).

China already has naval helicopters for their carriers. These include the Russian Ka-28 (submarine search) and Ka-31 (radar early warning) and Mi-8 (transports). China is still having problems designing and building naval helicopters that can match or surpass Russian models. So Russian choppers will continue in service for at least another decade. 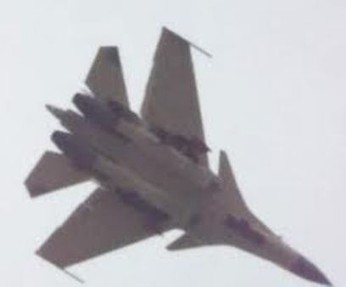 The Shi Lang has a maximum capacity of 50 jets and 18 helicopters, but it appears that China will not be using these many on their carriers initially. The Russians never maxed out the air wing on these ships either. Moreover, the most common use of Chinese carriers in the first few years will be training and, on occasion, "showing the flag" (visiting foreign ports to, well, show off.) Both training and show-off missions, will probably involve a carrier air wing of eight jets and 9-10 helicopters (six ASW/Anti-Submarine Warfare, three AEW/radar early warning and one SAR/search and rescue.) Once the J-11BH is ready, there will be several years of training pilots and carrier deck crews to handle this larger aircraft. So it won't be until the 2020s before China is ready to send a carrier to sea with a militarily significant air wing. This will include J-11BH fighters J-10AH light bombers, as well as AEW, ASW and SAR helicopters.

The Liaoning has been in the shipyards for nine years now, where China has been tinkering with this half finished Russian aircraft carrier. Three years ago, the ex-Soviet/Russian/Ukrainian Varyag, was renamed the Shi Lang and given the pennant number 83. Two years ago, China decided to go forward with building a carrier fleet. That accounts for the increased progress on the Shi Lang since then. In the last two years, the Shi Lang was placed into dry dock, where engines and other heavy equipment was installed. Topside, the radar mast was completed, and now there is a Chinese radar system being installed.

The Varyag is one of the Kuznetsov class carriers that Russia began building in the 1980s. Originally the Kuznetsovs were to be 90,000 ton, nuclear powered ships, similar to American carriers (complete with steam catapults). Instead, because of the high cost, and the complexity of modern (American style) carriers, the Russians were forced to scale back their plans, and ended up with the 65,000 ton (full load ) ships that lacked steam catapults, and used a ski jump type flight deck instead. Nuclear power was dropped, but the Kuznetsov class was still a formidable design. The 323 meter (thousand foot) long ship normally carries a dozen navalized Su-27s (called Su-33s), 14 Ka-27PL anti-submarine helicopters, two electronic warfare helicopters and two search and rescue helicopters. But the ship was meant to regularly carry 36 Su-33s and sixteen helicopters. The ship carries 2,500 tons of aviation fuel, allowing it to generate 500-1,000 aircraft and helicopter sorties. Crew size is 2,500 (or 3,000 with a full aircraft load.) Only two ships of this class exist; the original Kuznetsov, which is in Russian service, and the Varyag.

The Chinese have been in touch with Russian naval construction firms, and may have purchased plans and technology for equipment installed in the Kuznetsov. Some Chinese leaders had quipped several years ago, about having a carrier by 2010 (this would have to be a refurbished Varyag), but it soon became clear that 2012 was more likely. Even that may be too soon, as the Chinese have been burned before when they tried to build new military technology in a hurry. The Chinese appear intent on getting it right the first time.

Three years ago, China announced that its first class of carrier aviators had begun training at the Dalian Naval Academy. The naval officers are undergoing a four year course of instruction to turn them into fighter pilots capable of operating off a carrier. China already has an airfield, in the shape of a carrier deck, built at an inland facility. The Russians have warned China that it may take them a decade or more to develop the knowledge and skills needed to efficiently run an aircraft carrier. The Chinese are game, and are slogging forward.