The U.S. Air Force's B-2 stealth bomber is the flagship of the nation's long-range strike arsenal, and one of the most survivable aircraft in the world. Its unique capabilities, including its stealth characteristics, allow it to penetrate the most sophisticated defenses and hold at risk high value, heavily defended enemy targets. The B-2 has demonstrated its capabilities in several combat scenarios, most recently during Operation Iraqi Freedom.

The B-2 is the only U.S. aircraft that combines long range, large payload and stealth in a single platform, giving it the ability to project air power anywhere in the world. It can fly more than 6,000 nautical miles unrefueled and more than 10,000 nautical miles with just one aerial refueling. With its ability to carry more than 20 tons of conventional and nuclear ordnance and deliver it precisely under any weather conditions, the B-2 also has the ability to change the outcome of a conflict with a single mission.
Northrop Grumman, the B-2 prime contractor, leads an industry team that is working with the Air Force to modernize the B-2 to ensure that it remains fully mission capable against evolving worldwide threats. A range of upgrade programs are improving the B-2's lethality; its ability to collect, process and disseminate battlefield information with joint force commanders or other local first responders worldwide; and its ability to receive updated target information during a mission.
Twenty one aircraft were built in the original B-2 fleet. Today, the fleet consists of 20 aircraft, following the loss, in Feb 2008, of the Spirit of Kansas, which crashed while taking off from Andersen Air Force Base, Guam, the first such incident in the B-2's 19 years of operation. Since 1989, B-2 aircraft have flown more than 14,000 sorties and accumulated more than 75,000 flying hours without incident, an unprecedented safety record. Nineteen B-2s are currently based at Whiteman Air Force Base, Mo., home of the 509th Bomb Wing, while one aircraft is assigned to flight-testing at Edwards AFB, Calif. to validate software and weapon systems upgrades.

Upgrades
In 2004, Northrop Grumman tested a new alternate high-frequency material (AHFM) for use as a Radar-absorbent material coating for the B-2.

In 2008, the US Congress funded upgrades to the B-2s weapon control systems for hitting moving targets. 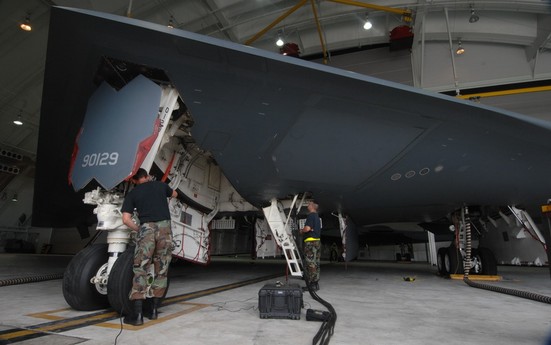 On 29 December 2008, Air Force officials awarded a production contract to Northrop Grumman to modernize the B-2 fleet's radar. The contract provides advanced state-of-the-art radar components, with the aim of sustained operational viability of the B-2 fleet into the future. The contract has a target value of approximately US$468 million. The award follows successful flight testing with the upgraded equipment. A modification to the radar was needed since the U.S. Department of Commerce required the B-2 to use a different radar frequency. It was reported on 22 July 2009 that the B-2 had passed the second of the two USAF audit milestones associated with this upgraded AESA radar capability.

On 28 April 2009, an Air Force/contractor team verified that the 30,000 pound Massive Ordnance Penetrator (MOP) would fit in the B-2's bomb bay.

Block 10 configured aircraft provide limited combat capability with no capability to launch conventional guided weapons. The Block 10 model carries only Mk-84 2,000-pound conventional bombs or gravity nuclear weapons. The first operational version of the Spirit, called Block 10, began to be delivered to Whiteman AFB in December, 1993, and continued to April 1996. B-2s in this configuration were located at Whiteman Air Force Base and were used primarily for training. As with most new warplanes, these had only limited initial capabilities with refinements to be added as the system matured. Block 10 planes initially were capable of carrying only general purpose (Mk-84) 2,000 LB bombs or gravity-delivered nuclear weapons to "soft" targets from medium or high altitudes. This sufficed for the initial deployment, but the planes were later returned to Palmdale for upgrading to Block 20 or Block 30 status.

Block 20 configured aircraft have an interim capability to launch nuclear and conventional munitions, including the GAM guided munition. The Block 20 has been tested with the Mk-84, 2,000-pound, general-purpose bombs and the CBU-87/B Combined Effects Munition cluster bombs (low-altitude, full-bay release). Block 20 aircraft, produced between April and December 1996, provided greater electronic and weapon-delivery abilities. A Terrain Avoidance/Terrain Following (TA/TF) capability provided for low-profile missions. Block 20 also included an interim precision-guided bomb system based on the use of the Global Positioning System (GATS/GAM).

Block 30 configured aircraft are fully capable and meet the essential employment capabilities defined by the Air Force. The first fully configured Block 30 aircraft, AV-20 Spirit of PENNSYLVANIA, was delivered to the Air Force on 07 August 1997. Compared to the Block 20, the Block 30s have almost double the radar modes along with enhanced terrain-following capability and the ability to deliver additional weapons, including the Joint Direct Attack Munition and the Joint Stand Off Weapon. Other features include incorporation of configuration changes needed to make B-2s conform to the approved radar signature; replacement of the aft decks; installation of remaining defensive avionics functions; and installation of a contrail management system.

All block 10, 20, and test aircraft were eventually modified to the objective block 30 configuration. This modification process began in July 1995 and was completed in June 2000. The Spirit of Missouri was the first Block 10 B-2 delivered to the Air Force. It arrived at Whiteman on 17 December 1993, the 90th anniversary of flight and the 49th anniversary of the 509th Bomb Wing. The Spirit of Missouri departed Whiteman 09 November 1995 and returned to the Northrop Grumman Plant 42 assembly line where it underwent the two-year modification process to upgrade it to its final Block 30 configuration. In January 1998 the upgraded aircraft joined the fleet of Whiteman's newest squadron, the 325th Bomb Squadron.

The Spirit of Indiana, a Block-30 aircraft, was the 20th of 21 B-2s to be named. The Spirit of Indiana arrived at Whiteman in May 1999, bringing the total number of B-2s on station to 10. The B-2 fleet had 16 combat-coded aircraft by the second quarter of FY00. Whiteman welcomed home the final B-2 when Spirit of America rolled to a stop in front of base operations 14 July 2000. More than 150 members of the Whiteman community braved 100-degree temperatures to roll out the red carpet for the 21st member of the B-2 fleet. Spirit of America was flown home by Col. Tony Przybyslawski, 509th Bomb Wing commander, and Maj. Bob Duncan, 325th Bomb Squadron assistant director of operations.