The Dokdo-class is a class of Landing Platform Helicopter (LPH) amphibious assault ships operated by the Republic of Korea Navy. Designed by Hanjin Heavy Industries, the requirements for the amphibious landing ships were to enhance Korea's current amphibious operation capability, both in terms of assault and military operations other than war (MOOTW) type operations.
The Dokdo Class of LPH are named after islands deemed important or symbolic to the ROK Navy. Three ships were planned at first, but the third ship was cancelled during the period of Lee Myung-bak government.
ROKS Dokdo (LPH-6111) is named after the Liancourt Rocks, which are called "Dokdo" in Korean but "Takeshima" in Japanese. Although the South Korean Coast Guard took control of the isles in 1954, Japan still disputes the sovereignty of the rocks.
The second unit, the ROKS Marado, is named after Marado Island, commonly thought of as being both the ending and beginning point of Korea. Today a monument stands there recognizing it as the southernmost point of the country. This ship was cancelled once, but the budget was restored in 2012. A ski ramp for operations of V/STOL jet fighters is being considered for Marado.
The third unit was to be named after Baengnyeong Island, which is located in the Yellow Sea near the disputed Northern Limit Line (NLL) with North Korea. Baekryeong Island is the territory administered by South Korea that is closest to the NLL. It was an important military base and the site of fierce combat during the Korean War.

Dokdo LPH acts as a command and control platform for the maritime mobile fleet and supports three-dimensional landing operations as well as maritime air operations. It can also be deployed in a range of operations including in support of national overseas policy, peacekeeping operations, disaster recovery, counter-terrorism operations and national prestige enhancement.
Dokdo is the largest vessel in the South Korean Navy. It has almost similar specifications compared to the Spanish Navy's aircraft carrier Príncipe de Asturias and the Thai Navy's Chakri Naruebet light aircraft carrier.
Design and features

Developed based on the concept of over-the-horizon assaults, Dokdo can conduct amphibious landing operations with high-speed LCAC and helicopters from beyond the horizon.
The ship's combat data system manages and controls onboard weapons and allows the ship to command support vessels and aircraft in the strategic mobile operation fleet.
The ship has an overall length of 199m, a width of 31m and a draught of 7m. The standard displacement of the vessel is 14,000t and full load displacement is 18,000t. The LPH can carry over 700 marines, 10 trucks, six tanks, six AAVs, three field artillery pieces, 10 helicopters and two LCACs. Dokdo can complement more than 330 crew members.

Aircraft capabilities
The flight deck can accommodate five UH-60 Black Hawk helicopters at a time. The aircraft hangar facility is provided for UH-60 helicopter and the AH-1 attack helicopter. The aeroplane shed on the lower deck is a multi-layer structure equipped with elevators.
The flight deck is covered with Urethane to withstand the heat created by the aircraft during operations.
The ship can operate short-range and VTOL (vertical take-off and landing) aircraft such as the Harrier or F-35B, when equipped with a ski jump board module.

Weapon systems
The LPH is armed with RIM-116 RAM (rolling airframe missile) system. RAM is an infrared homing surface-to-air missile used against anti-ship cruise missiles.
The missile can travel at a maximum speed of Mach 2 while carrying a blast fragmentation warhead for a range of 9km. The ship is also fitted with two goalkeeper close-in weapon systems (CIWS) supplied by Thales Nederland. The system provides close-point defence against incoming missiles and ballistic shells. The seven barrelled CIWS can fire 4,200 rounds a minute for a maximum range of 2,000m.

Radar technology
The ship's long range volume search radar is the Thales SMART-L. The radar can detect and track targets within the range of 400km. The ship is also equipped with MW08 surface search radar and AN/SPS-95K navigation radar. 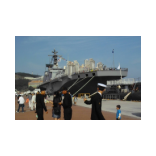 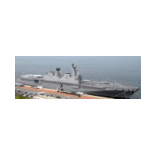 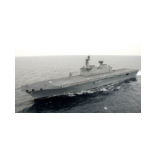 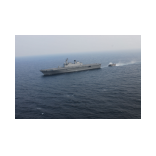 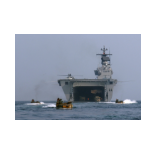 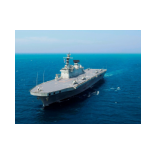