The Kamov Ka-50 "Black Shark" (Chornaya Akula Black Shark, NATO reporting name: Hokum A) is a single-seat Russian attack helicopter with the distinctive coaxial rotor system of the Kamov design bureau. It was designed in the 1980s and adopted for service in the Russian army in 1995. It is currently manufactured by the Progress company in Arsenyev.

The aircraft carries a substantial load of weapons in four external hardpoints under the stub wings plus two on the wingtips, a total of some 2,000 kg depending on the mix. 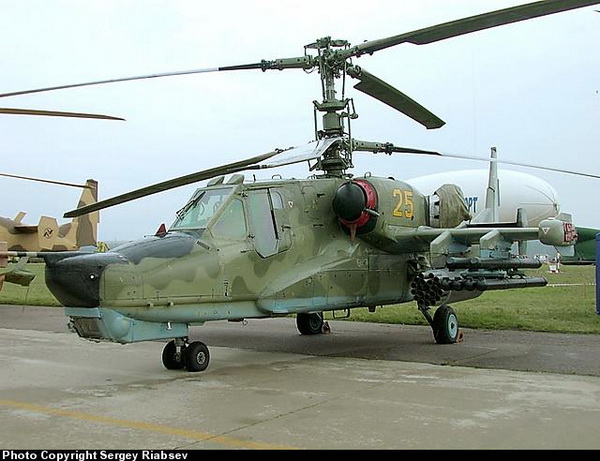 The main armament are the twelve laser-guided Vikhr anti-tank missiles with a maximum range of some 8 km. The laser guidance is reported to be virtually jam-proof and the system features automatic guidance to target, enabling evasive action immediately after missile launch. The fire control system automatically shares all target information among the four Black Sharks of a typical flight in real time, allowing one helicopter to engage a target spotted by another, and the system can also input target information from ground-based forward scouts with personnel-carried target designation gear. The Ka-50 can also carry several Rocket pods, which include the S-13 and the S-8 rockets. The rockets, rocket pods, and along with the Ka-50 can be upgraded to the Ugroza Precision-guided munition system. The integrated 30 mm cannon is semi-rigidly fixed on the helicopter's side, movable only slightly in elevation and azimuth. The semi-rigid mounting improves the cannon's accuracy, giving the 30 mm a longer practical range and better hit ratio at medium ranges than with a free-turning turret mount.

Ka-50 took part in the Russian Army's operations against rebels in the Chechen Republic. In December 2000, a pair of production Ka-50s arrived to the area. With the Ka-50s was a Ka-29, to provide reconnaissance and target designation. On January 6, 2001, the Ka-50 used live weapons against a real enemy for the first time. On January 9, at the entry into a mountain gorge in the area of a settlement named Komsomolskoye, a single Ka-50 accompanied by an Mi-24 used S-8 unguided rockets to destroy a warehouse full of ammunition belonging to Chechen insurgents. On February 6, in the forest covered mountain area to the south of the village of Tsentoroj, the strike group composed of two Ka-50s and the sole Ka-29 discovered and, from a range of 3 km, destroyed a fortified camp of insurgents using two "Vikhr" guided missiles. February 14, saw a similar strike group carrying out a "hunting" mission in the area of Oak-Yurt and Hatun. In difficult conditions, pilots found and destroyed eight targets. These missions tested the type's airframe, as well as its on-board systems and armament. Its successful performance in difficult, mountainous terrain once again confirmed the usefulness of the many advanced features of the Ka-50's design, including its power and maneuverability.

It is unclear if the type has been used in combat since. However, it has participated in a number of exercises. Most notable has been "Boundary 2004" which took place on the Edelweiss mountain range in Kyrgyzstan, in August 2004. Once again the "Hokum" demonstrated its advantages by operating at a high altitude and an air temperature of more than 30 °C. A Ka-50 provided cover for the landing of troops and then successfully worked on the ground targets using its cannons and rockets.

Ka-50 Bort 22 with a distinctive "Black Shark" livery was lost in a crash during 1998. Its pilot Maj.Gen. Boris Vorobyov was killed in the crash. 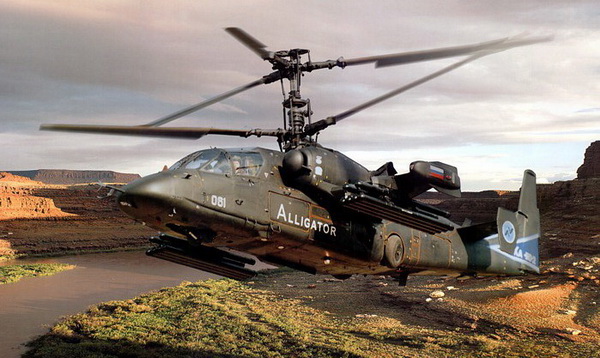 India issued a request for proposal for 22 attack helicopters for the Indian Air Force in May 2008. The Kamov Ka-50 along with Mil's Mi-28 and Eurocopter's Tiger were the front-runners for this order as of October 2008. The tender though was eventually cancelled and later India announced a new tender, with revised conditions. Russia again offered Mi-28N and Ka-52. However, only Mi-28N and Apache Longbow were eventually shortlisted, as of July 2010.