The Dassault-Breguet Super Étendard is a French carrier-borne strike fighter aircraft designed for service with the French Navy. The aircraft entered service in June 1978 and was first used in combat by Argentina during the 1982 Malvinas (Falklands) War.
Design and development
The Super Étendard is a development of the earlier Étendard IVM that was originally to have been replaced by a navalised version of the SEPECAT Jaguar (the Jaguar M), until this plan was stalled by political problems, together with problems with operating the Jaguar aboard ships, including the inability to land back on a carrier after an engine failure. Instead, Dassault proposed an improved version of the Étendard IVM, with a more powerful engine, a new wing and improved avionics. This proposal was accepted by the French Navy in 1973 as the Super Étendard.
The Super Étendard is a small, single-engined, mid-winged aircraft with an all metal structure. Both the wings and tailplane are swept, with the folding wings having a sweepback of about 45 degrees, while the aircraft is powered by a non-afterburning SNECMA Atar 9K-50 turbojet with a rating of 49 kN (11,025 lbf). It is fitted with a Thomson-CSF Agave radar, closely integrated with the new air-launched version of Aérospatiale's anti-shipping missile, the AM 39 Exocet, which forms the main anti-ship armament of the aircraft. French Étendards could also carry tactical nuclear weapons.
The first of three prototypes, a IVM modified with the new engine and some of the new avionics, made its maiden flight on 28 October 1974. The French Navy initially ordered 60 of the new model, with options for a further 20, but budget cuts lead to only 71 being purchased in the end, with deliveries starting in June 1978, while the Argentinian Navy ordered a further 14. Production was completed in 1983. 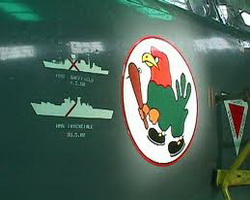 The Argentine Naval Aviation decided to buy 14 Super Étendards in 1980, after the United States put an arms embargo in place-due to the Dirty War-and refused to supply spare parts for their A-4Q Skyhawks. Assigned to 2nd Naval Air Fighter/Attack Squadron, Argentine pilots used French flight trainers between November 1980 and August 1981 in France, but at the time of the Malvinas (Falklands) War, they had received only 45 hours of actual flight time in the aircraft. Between August and November 1981, five Super Étendards and five Exocets were shipped to Argentina. All five of the missiles were used during the conflict, with one missile hitting the British destroyer HMS Sheffield and two the merchant aircraft transporter Atlantic Conveyor. Two missiles were used in each of those attacks.
The fifth missile was launched in an attack intended to strike against the British aircraft carrier HMS Invincible. (A sixth Exocet, which was fired from an improvised land based launcher failed to acquire a target, but the seventh missile hit and the warhead 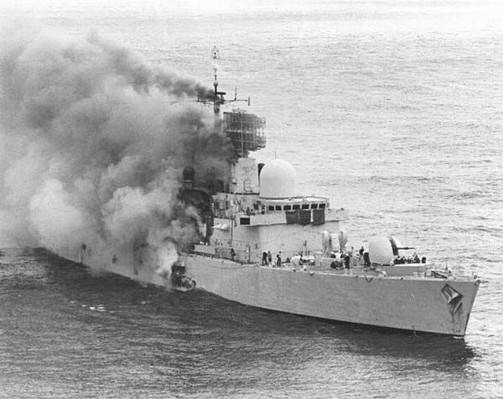 detonated causing casualties and damage to HMS Glamorgan. This launcher was designed by Argentine technicians.)

Once the conflict was over, Super Etendards performed qualifications on aircraft carrier ARA 25 de Mayo until the ship's final retirement From 2001, qualifications are made on Brazilian Navy carrier São Paulo  and/or touch-and-go on US Navy carriers during

Gringo-Gaucho maneuvers when they are in transit within Argentine coastal waters.
As of 2010, Argentine Super Étendards are still in service and French cooperation to upgrade the aircraft was announced.

France
Deliveries of the Super Étendard to the French Navy started in 1978, with the first squadron, Flotille 11F becoming operational in February 1979. In total, three operational squadrons and a training unit were equipped with the Super Étendard.
The first operational missions took place in Lebanon during Operation Olifant. On 22 September 1983, French Navy Super Étendards operating from the aircraft carrier Foch bombed and destroyed Syrian forces positions after a few artillery rounds were fired at the French peace keepers. On 17 November 1983, the same airplanes attacked and destroyed a Hizbollah training camp in Baalbeck after a terrorist attack on French paratroopers in Beirut.
France's Super Étendards were modified to carry the ramjet powered Air-Sol Moyenne Portée air-launched nuclear missile. From 1991, the original Étendard IVMs were withdrawn from French service, (although the reconnaissance version of the Étendard IV, the IVP remained in service until July 2000) and the Super Étendards underwent a series of upgrades throughout the 1990s to better suit them to modern warfare. These modifications included a new Thomson-CSF Anemone radar, with nearly twice the range of the previous Agave radar, the ability to carry and target the latest generation of laser-guided bombs and missiles, improved self defence ECM systems and the ability to carry a reconnaissance pod. These uprated aircraft, designated Super Étendard Modernisé (SEM) participated in NATO's Allied Force operations over Serbia in 1999, flying over 400 combat missions with 73% of the assigned objectives destroyed : the best performance of all the air forces involved in the missions over Serbia. The SEM also flew strike missions in Operation Enduring Freedom.
Operation Héraclès starting 21 November 2001 saw the deployment of the Charles de Gaulle and its Super Étendard in Afghanistan. Operation Anaconda, starting on 2 March 2002 saw extensive use of the Super Étendard in support of French and allied ground troops. Super Étendard's returned to operations over Afghanistan in 2007 and 2008. One of their main roles was to carry laser designation pods to illuminate targets for Dassault Rafales.
All Super Étendards are expected to be retired from French service by 2015, to be replaced from 2006 onwards with Dassault's Rafale M.

Iraq
Five Super Étendards were loaned to Iraq in 1983 while the country waited for deliveries of Agave equipped Dassault Mirage F1s capable of launching Exocet missiles that had been ordered, arriving in Iraq on 8 October 1983. These aircraft used Exocets with some success against shipping (particularly tankers) sailing to and from Iranian ports, 51 attacks in total in the Persian Gulf before being returned to France in 1985. At least two were shot down during the spring and summer of 1984 by Iranian F-14s, while Iran claims to have shot down a third one. Of the two aircraft destroyed one was indeed shot down, the other was only damaged but crashed whilst trying to return to base. Only three aircraft were returned to France.

Argentina
Argentine Naval Aviation received 14 aircraft, eleven are still in service.
France
Aviation Navale received 71 aircraft, all are to be replaced by the Rafale M.
Iraq
Iraqi Air Force was lent five French aircraft between 1983 and 1985. Only three returned.