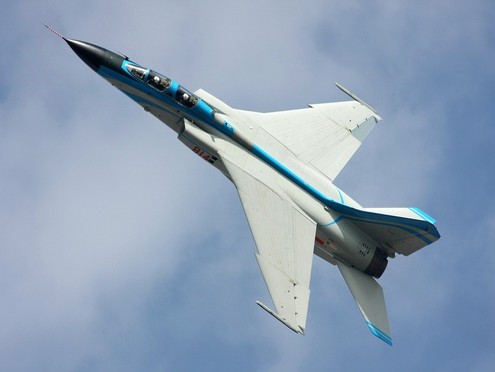 In the early 1970s, the PLA submitted a request to the Ministry of Aeronautics (MoA), the predecessor of AVIC to develop a new fighter-bomber to replace the Harbin H-5 and Nanchang Q-5. Due to failure to secure a joint design venture with foreign countries, an indigenous program was initiated on April 19, 1983 with an order personally authorized by the then Chinese paramount leader Deng Xiaoping. Mr. Chen Yijian (1930) was named as the general designer, and Mr. Yi Zhibin (May 2, 1930 ) was named as the general engineer. The deputy minister of the Chinese Aeronautical Ministry, Mr. Wang Ang was named as the test flight program manager, and the deputy director of the Military Aircraft Directorate of the Chinese Aeronautical Ministry, Mr. Ma Chenglin, was named as the deputy test flight program manager. The chief test pilot was commander Huang Bingxin, the commander of the People's Liberation Army Air Force (PLAAF) Flight Test Regiment, and he was also the vice president of China Flight Test Establishment (CFTE), while his colleague, the deputy commander of the PLAAF Flight Test Regiment, Mr. Peng Diyu, was named as the commander on the ground for all test flights. The backseat chief test pilot was Mr. Xing Yancai, who was also the chief navigator of CFTE. Initially, two different variants were intended to meet the separate requirements from the PLAAF and PLANAF. The PLAAF variant was to be an all-weather deep strike bomber, with side-by-side cockpit seating, electronic countermeasures (ECM), and terrain following capabilities similar to the General Dynamics F-111. However, this variant was dropped in the early 1980s.
The PLANAF variant was for an all-weather, two-seat tandem, strike and reconnaissance aircraft. Six prototypes were built by December 1988 and a small batch of 12 to 18 JH-7s were delivered to the PLANAF in the early 1990s for evaluation. The first JH-7s used imported Rolls-Royce Spey Mk.202 engines. Later, they were replaced by two, license-built, Spey Mk.202s named WoShan-9 (WS-9). These first batch of JH-7 used the Type 243H multifunction radar, with maximum range of 175 kilometres (109 mi) against ships and 75 kilometres (47 mi) against MiG-21 size aerial targets. The original JH-7 was designed purely as an anti-shipping fighter-bomber platform, though this concept changed as China restructured its air force to deal with possible future conflict. Its new requirement for the JH-7 was to have air-to-surface precision strike capability, with the new aircraft being designated as the JH-7A. JH-7A is the first aircraft in China to incorporate the concept of paperless design, using CAD/CAM CATIA V.5 software, and it is also the first aircraft in the world to be designed by using CATIA V5. The general designer of JH-7A is Mr. Tang Changhong and the deputy general designer is Mr. Wu Jieqin JH-7A is in full production and all current JH-7 in service have been upgraded with JH-7A electronics.
The newer JH-7A airframe is lighter and stronger than that of the original JH-7 variant, giving the JH-7A model a maximum armament load of 9000 kg, compared to the Sukhoi Su-24 and Su-30 at 8000 kg and the General Dynamics F-111 at 11,000 kg. As it is lighter and less complex than the variable geometry wing Su-24 and F-111 or the multi-role Su-30, the JH-7 is considerably cheaper to produce and operate. Although it does not have the air-to-air performance of the Su-30, its range is greater. The JH-7 in PLAAF service has no significant aerial combat role, since large quantities of specialized aircraft are available for that purpose. The JH-7/A represents a significant strike capability for the PLANAF and its load capacity allows the aircraft to carry 2 (JH-7) or 4 (JH-7A) domestically-made YJ-82 anti-ship missiles in maritime strike operations. It can also be armed with infra-red homing air-to-air missiles such as the PL-5. Internal armament comprises a single 23mm twin-barrel GSh-23L autocannon.

Electronic attack
A photograph which has recently appeared on the Internet shows Chinese Peoples' Liberation Army Naval Air Force Xian JH-7A 81667 carrying what are believed to be some form of electronic attack pods similar to those used on the EA-6B Prowler and E/A-18G Growler. This aircraft is from the 6th Naval Air Division/16th Fighter-Bomber Air Regiment at Shanghai-Dachang. There have been a number of reports recently from Chinese sources that the JH-7A had been selected for development as an electronic attack platform and this photograph appears to confirm that development is underway.

Operational history
In 2004, the improved JH-7A entered service with PLANAF. The JH-7A is updated with the JL-10A pulse doppler radar, fly-by-wire (FBW) flight control system, one-piece windscreen, additional hardpoints and capability to use Laser-guided bombs (LGB) and Kh-31P anti-radiation missiles. JH-7 currently equips the PLANAF 6th Division, PLANAF 9th Division and PLAAF 28th Division. A PLANAF JH-7 regiment typically consists of 18 to 20 aircraft, which is fewer than the 24 to 28 aircraft of PLAAF aircraft regiments.
July 19, 2009, a JH-7A crashed during the Sino-Russia military exercise "Peace Mission 2009". The two pilots failed to eject and were killed.